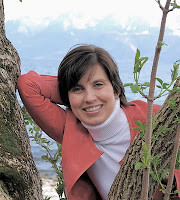 "Beth's Song" and "Take me Home," featured in Sing, were set to music by British composer, Harriet Bushman and recorded by the internationally acclaimed Amabile Choirs of London, Canada and are available on iTunes! All proceeds benefit Amabile.

Angela recently launched a blog devoted to writing book three in the Taken by Storm saga. She's posting her entire creative journey online and invites all her readers to take part in the journey.
See http://caymansummer.blogspot.com and www.angela-morrison.com .
Angela graduated from Brigham Young University with a BA in English and holds an MFA in Writing for Children and Young Adults from Vermont College of Fine Arts where she studied with Ron Koertge (Stoner and Spaz), Sharon Darrow (Trash), Louise Hawes (Rosey in the Present Tense), and Susan Fletcher (Shadow Spinner). She also workshopped with Tobin Anderson, Alison McGhee, Tim Wynne-Jones, and the late, Norma Fox Mazer.
She grew up in Eastern Washington on the wheat farm where Taken by Storm is set. After over a decade abroad in Canada, Switzerland and Singapore, she and her family are happily settled on the edge of the Sonoran desert in Mesa, Arizona. Angela enjoys speaking to writers and readers of all ages about her craft. She has visited over 50 schools since her debut where she involves students in her creative process as they search for the perfect teen heroine and . . . the guy. She has four children—mostly grown up—and the most remarkable grandson in the universe.
Check out "About Me" on Angela's Website for more about Angela.
If you'd like to invite Angela to your school or event, you can preview her presentations at "Appearances."

Angela shares her best writing lessons at liv2writ and posts what's happening with all her books on ChatSpot.

For an indepth look at how Angela came to write Taken by Storm, and its miraculous road to publication, read "Storm's Story," starting at the first post way back in 2008!
Angela has done hundreds of interviews and guest posts all over the YA blogosphere. Links to those coming soon.