A Tour of Nazareth!

Before I tell you about Nazareth, I have a big favor to ask. CAYMAN SUMMER is eligible for the 2011 Whitney Awards. I just need a few of you who loved it to nominate it. Anyone who doesn't have a financial stake in it can nominate it by filling in this simple online form. The deadline is December 31, 2011. Thank you!

Haifa is in the north--in Jesus day this was called Samaria. In Old Testament times these were the Northern Tribes--the ten who were lost.

On our way to Nazareth, we stopped at Mt. Carmel where this statue of Elijah depicts his triumph over 450 priests of Baal. Mt. Carmel overlooks the Valley of Megiddo.

At the time of Christ, Nazareth was a small, insignificant village. Mary and Joseph lived here with only 400 people. Nazareth had only one viable spring to provide water. Other nearby villages had about 20 springs. Today, Nazareth is a crowded Arab city of 70,000 people. Thirty percent are Arab Christians. The rest of the population are Moslems. Our guide said there is a good relationship between the Arab Christians and Moslems in Israel.

This is the Synagogue Church. 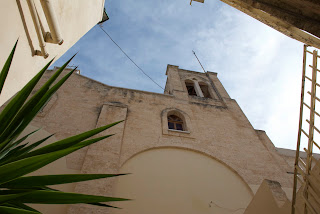 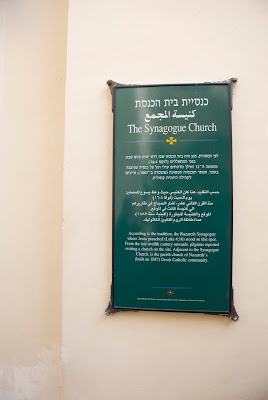 Here's what it looks like inside. Old stones. No windows. A table in front where the scrolls could be read by the rabbi. Pictured is one of our guides, Don Perry, a professor of Biblical Hebrew from BYU. He studied Hebrew in Jerusalem at the Hebrew University and is one of the scholars who is working to translate the Dead Sea Scrolls.  The church isn't two thousands years old, but it is built on a site where history records an old synagogue stood. 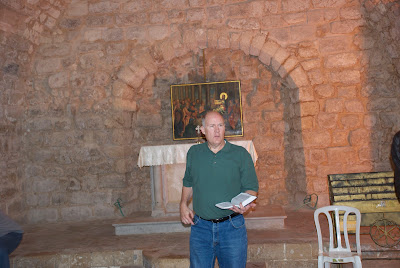 Jesus grew up in Nazareth. He began His ministry in a synagogue that looked very much like this. When he stood up in this synagogue and read from the sacred Torah scrolls, his neighbors got so angry they wanted to kill him. 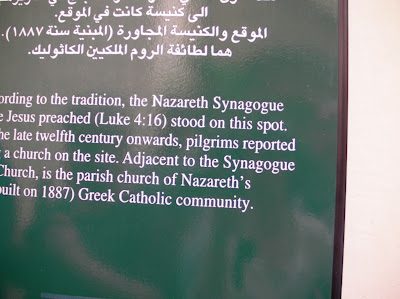 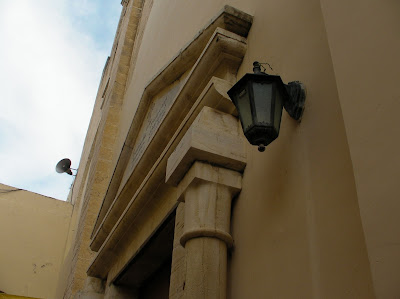 Jesus miraculously escaped the angry people in Nazareth and went to Cana. Cana was a large aristocratic city with a population of 3,000. Jesus performed His first miracle, turning the water to wine for his mother at a wedding, in Cana. Jesus also lived in Capernaum. We didn't visit Cana, but we did see Capernaum. I'll share that visit with you tomorrow!