Day Two of our Anniversary Party! The response so far has been phenomenal. It's fantastic to hear again from so many of you. If you haven't entered the giveaway yet, get on it!  Remember, Taken by Storm's Kindle ebook is only $ .99! Also this week only, Unbroken Connection (Book 2) and Cayman Summer (Book 3) are free on Kindle! Hurry. The free promotion ends Friday, July 20th. Don't own a Kindle? Download free Kindle apps for your laptop, tablet, iTouch, or phone. Tomorrow is the whirlwind 50 blog promo blast. But today, brace yourselves, Michael is here to answer questions.


Angela: Welcome to the blog, Michael. Thanks for dropping by.
Michael: Least I can do. You're throwing this party for us. Guess I should show up.
Angela: The first question we have from a reader is, "Are you still as cute as ever?"
Michael: Uhhh . . . freak, what am I supposed to say to that?
Angela: He's blushing, girls. And it's very cute. Okay, next question. Taken by Storm has had three different covers. Which one is your favorite?

Michael: Leesie loves the new one. I don't know. The pink sky isn't really me. Have you guys ever seen the first cover design from Razorbill? No? Here. Take a look. 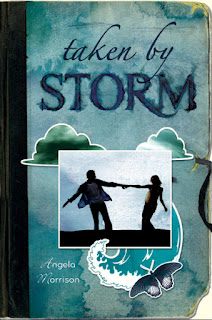 Leesie really hated this one. We both liked the water-stained chapbook idea, but she threw a fit because the girl is wearing a sleeveless top. The wimpy guy looks like he starred in a 70s sit-com. And we both thought the scrapbook elements were way too cartoon for our story.


Angela fought for changes. She thought the picture on the final hardcover jacket was so much better than the first one that she shut up when they sent that one. I don't know. I just have way better hair than that guy. And the chick has bleached blonde hair and a receding hairline. Seriously. Leesie is way prettier than that. 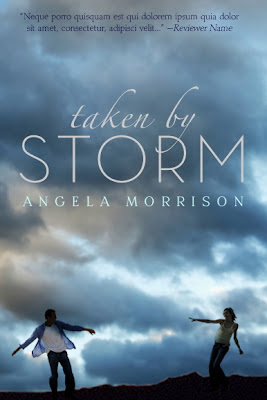 I liked the blue one with storm clouds best. You've never seen it? Take a look. It still has that freaky couple and you can see that the girl's shirt is nothing that Leesie would ever wear, but I love the dark clouds and the smoky gray blue of it. We thought this was going on the paperback. Big surprise when that purple thing showed up.
Angela: Remember the picture I wanted for the paperback cover?
Michael: Yeah. That was sweet. Do you have it?
Angela: Of course. This is the first time I've ever showed it on the blog.
Michael: Cool. Drum roll . . . 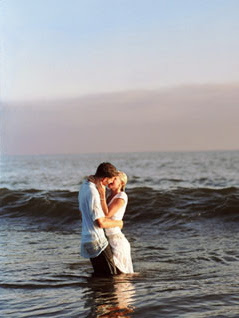 Michael: Add the clouds from the blue one and that would have been perfect. Why didn't you use it for the new cover?
Angela: I tried. I emailed the photographer, and he never wrote back. Then I found the new picture and liked it even better. It reminded me of you and Leesie at the lake on your first date. Ready for another question?
Michael: Shoot.
Angela: Readers keep asking me to write another book about you and Leesie. Would you like that?
Michael: No way. People, this woman is maniacal. Did you see what she did to us in the other books? We've had enough drama, thank you. Leave us alone!
Angela: Okay, this next question is from a reader who just finished Unbroken Connection. She's kind of mad at you. Here it is in her words. (Minor spoiler alert!) She says, "I would like to ask Michael...WHAT THE HECK IS WRONG WITH YOU???!!!"
Michael: Nice.
Angela: Shhh. She's just getting started. "From what I read in Unbroken Connection Leesie is trying to have you converted so that you guys may get married in the temple but nooo . . . URG!! Would you do it over again? If you love her so then why don't you at least try to read up on her religion not just go listen to the missionaries because she asked but for yourself??"
Michael: Freak, she totally nailed me. I admit it. I was a huge jerk. Give me a chance to make up for it. Read Cayman Summer.
Angela: Readers, this next question is a major spoiler alert! Don't read it unless you've finished reading Cayman Summer and are dying to hear about Michael and Leesie's plans for the future. This reader wants to know how many kids you have and where you are living.
Michael: I refer all baby questions to Leesie. Who knew she was so obsessed with them?Every time she sees one she goes nuts. She wants like twenty. I like kids, but 20? When I was in Brazil on my mission, I taught the music to kids at church. Yeah, I was a disaster, but the kids were fun. Leesie and I are still at school in Provo. Leesie will graduate from BYU in April. Then I'm going to transfer to a school in Florida so I can do marine biology. We'll be close enough to the condo to zip down to the Keys weekends and dive. I'm going nuts landlocked. On my mission, I couldn't even swim. At Christmas, I'm taking Leesie back to the Caymans so we can see Aunty Jazz, all our friends at the branch, and dive our brains out with the guys at East End. Three years later and they are all still working there. Freak. So much has happened to Leesie and me since then.
Angela: Okay, enough questions for now. We'll give you a break. Readers, if you have questions for Michael, ask them in the comments, and he'll drop by all this week and answer them.
Michael: All this week?
Angela: Right. It's the least you can do, remember?
Michael: Sure. Okay, later then.