Apologies, apologies. I disappeared this week, but I had a good reason--look what finally came? YAY!!! 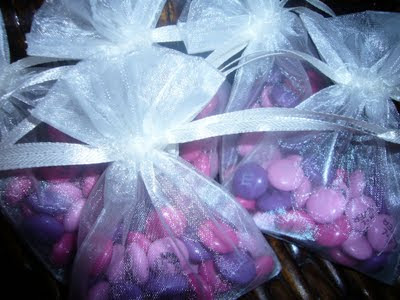 I spent the rest of the week sending them out into the world. All the book prizes finally went out, too. They should land on your doorstep soon.
I didn't want to order the M&Ms until we were back from our vacation in July. I had nightmares of the shipment sitting on my doorstep melting into a puddle in the 107 F Phoenix summer sun. Then I had nightmares of sending them out in their pretty organza bags and having you open the packet to find a melted pink and purple disaster.
So I bought special foil envelops and mini-icepacks to go in in them to keep them cool. 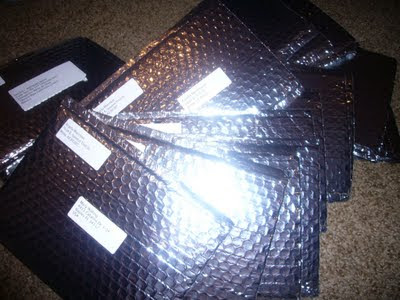 But what if the ice pack causes condensation gets the organza and M&Ms wet? So I put the favors in Ziplocs before sealing them up. 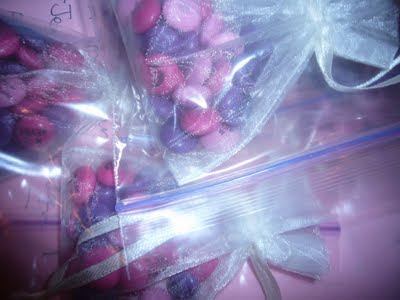 It's August, so it's humid here instead of desert dry like the rest of the year. The icepacks caused condensation on the outside of the package. A few mailing labels shriveled a bit. I worried they'd all fall of, but they stayed stuck.

The clerk at the post office was really nice. He patiently weighted out each packet and printed postage stickers because we were sure stamps wouldn't stick to the foil. This ended up to be far more complicated than I dreamed when I created the giveaway. I hope it works! And you love them. If you go to your mailbox and find a foil packet with melted pink and purple M&Ms in stained organza bag, I'm sorry!

I hope you open the packet and find beautiful pale pink, dark pink and deep purple M&Ms with "M+L 4VER," my name, and Michael and Leesie's faces from their first cover smiling at you. Can you make them out? That's as close as my camera would get. 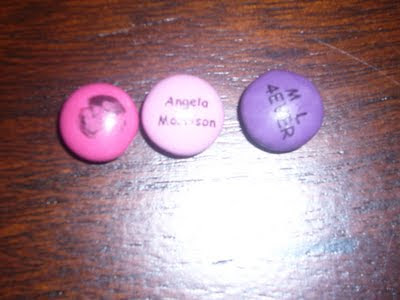 Phew! Now I can get back to the final photos for CAYMAN SUMMER. I'll post them Monday. I promise. And give you a sneak peak of SLIPPED--the book I'm revising right now.
Love you guys! Thanks to everyone who entered the contest and has been with me through Michael and Leesie's CAYMAN SUMMER journey. Stay tuned. I bought extra M&Ms so I can send some in my next contest. Maybe Christmas--when it cools off around here.
Posted by Angela at 5:30 PM